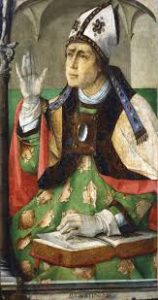 St Augustine’s Rule is the source for various religious orders such as those who carry his own name, the Sisters of Christian Charity, the Trinitarians, the Pauline Hermits, the Order of Mercy and the Norbertines and not least the Order of Preachers who regard him as their father (alongside St Dominic and St Francis!). It is speculated that about 150 religious congregations follow Augustine’s Rule.

Pope Benedict XVI is a great loved of Augustine and said the following:

“In this regard, through the two rightly famous Augustinian formulas (cf. Sermones, 43, 9) that express this coherent synthesis of faith and reason: crede ut intelligas (“I believe in order to understand”) believing paves the way to crossing the threshold of the truth but also, and inseparably, intellige ut credas (“I understand, the better to believe”), the believer scrutinizes the truth to be able to find God and to believe.

“The harmony between faith and reason means above all that God is not remote: he is not far from our reason and our life; he is close to every human being, close to our hearts and to our reason, if we truly set out on the journey.

“Precisely because Augustine lived this intellectual and spiritual journey in the first person, he could portray it in his works with such immediacy, depth and wisdom, recognizing in two other famous passages from the Confessions (IV, 4, 9 and 14, 22), that man is “a great enigma” (magna quaestio) and “a great abyss” (grande profundum), an enigma and an abyss that only Christ can illuminate and save us from. This is important: a man who is distant from God is also distant from himself, alienated from himself, and can only find himself by encountering God. In this way he will come back to himself, to his true self, to his true identity.”

Concerning the Augustinian Rule, Blessed Humbert of Romans, 5th Master of the Order of Preachers said: “There are many rules which impose a multitude of physical observance; but the Rule of Saint Augustine is built more on spiritual deeds, such as the love of God and neighbour, the unity of hearts, the harmony of customs, and other such things. Who does not know that spiritual deeds are of more importance than physical exercises? The more a rule deals with spiritual matters rather than physical ones, the more worthy it is of greater praise. Likewise the Rule of Saint Augustine observes such moderation that it avoids the dangerous extremes of too many or too few regulations. It takes the middle way where all virtue lies…

Since under this Rule Saint Dominic, father of the Friars Preachers, acquired perfection in every good and bore fruit as far as the salvation of souls is concerned, how fitting it is that his sons imitate him in this and so come to a similar perfection.”