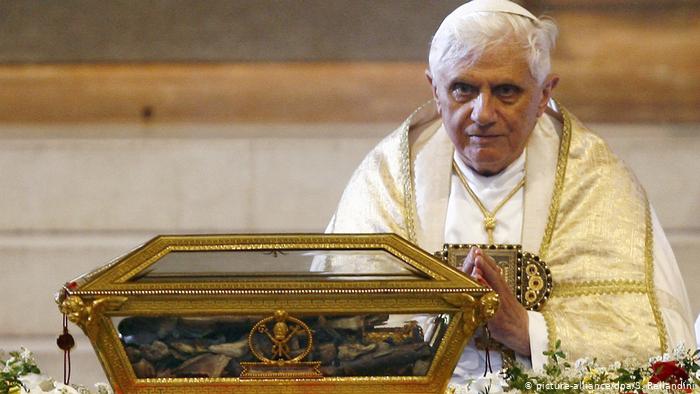 Today’s Doctor and Father of the Church St Augustine has been an object of study of the emeritus Pope, Benedict XVI. In a teaching on the saint, Benedict notes 3 conversions in Augustine’s life that are relevant to us today, especially on his feast day. In fact, I would say that what the Pope says is rather critical for Christians to consider with a certain degree of seriousness. Early in his papacy Benedict made a pilgrimage to Pavia, Italy to honor the relics of Augustine.

St Augustine was a passionate seeker of truth: he was from the beginning and then throughout his life. The first step of his conversion journey was accomplished exactly in his progressive nearing to Christianity. Actually, he had received from his mother Monica, to whom he would always remain very closely bound, a Christian education, and even though he lived an errant life during the years of his youth, he always felt a deep attraction to Christ, having drunk in with his mother’s milk the love for the Lord’s Name, as he himself emphasizes (cf. Confessions, III, 4, 8). But also philosophy, especially that of a Platonic stamp, led him even closer to Christ, revealing to him the existence of the Logos or creative reason. Philosophy books showed him the existence of reason, from which the whole world came, but they could not tell him how to reach this Logos, which seemed so distant. Only by reading St Paul’s Epistles within the faith of the Catholic Church was the truth fully revealed to him. This experience was summarized by Augustine in one of the most famous passages of the Confessions: he recounts that, in the torment of his reflections, withdrawing to a garden, he suddenly heard a child’s voice chanting a rhyme never heard before: tolle, lege, tolle, lege, “pick up and read, pick up and read” (VIII, 12, 29). He then remembered the conversion of Anthony, the Father of Monasticism, and carefully returned to the Pauline codex that he had recently read, opened it, and his glance fell on the passage of the Epistle to the Romans where the Apostle exhorts to abandon the works of the flesh and to be clothed with Christ (cf. 13: 13-14). He understood that those words in that moment were addressed personally to him; they came from God through the Apostle and indicated to him what he had to do at that time. Thus, he felt the darkness of doubt clearing and he finally found himself free to give himself entirely to Christ: he described it as “your converting me to yourself” (Confessions, VIII, 12, 30). This was the first and decisive conversion.

The African rhetorician reached this fundamental step in his long journey thanks to his passion for man and for the truth, a passion that led him to seek God, the great and inaccessible One. Faith in Christ made him understand that God, apparently so distant, in reality was not that at all. He in fact made himself near to us, becoming one of us. In this sense, faith in Christ brought Augustine’s long search on the journey to truth to completion. Only a God who made himself “tangible”, one of us, was finally a God to whom he could pray, for whom and with whom he could live. This is the way to take with courage and at the same time with humility, open to a permanent purification which each of us always needs. But with the Easter Vigil of 387, as we have said, Augustine’s journey was not finished.

He returned to Africa and founded a small monastery where he retreated with a few friends to dedicate himself to the contemplative life and study. This was his life’s dream. Now he was called to live totally for the truth, with the truth, in friendship with Christ who is truth: a beautiful dream that lasted three years, until he was, against his will, ordained a priest at Hippo and destined to serve the faithful, continuing, yes, to live with Christ and for Christ, but at the service of all. This was very difficult for him, but he understood from the beginning that only by living for others, and not simply for his private contemplation, could he really live with Christ and for Christ.

Thus, renouncing a life solely of meditation, Augustine learned, often with difficulty, to make the fruit of his intelligence available to others. He learned to communicate his faith to simple people and thus learned to live for them in what became his hometown, tirelessly carrying out a generous and onerous activity which he describes in one of his most beautiful sermons: “To preach continuously, discuss, reiterate, edify, be at the disposal of everyone – it is an enormous responsibility, a great weight, an immense effort” (Sermon, 339, 4). But he took this weight upon himself, understanding that it was exactly in this way that he could be closer to Christ. To understand that one reaches others with simplicity and humility was his true second conversion.

But there is a last step to Augustine’s journey, a third conversion, that brought him every day of his life to ask God for pardon. Initially, he thought that once he was baptized, in the life of communion with Christ, in the sacraments, in the Eucharistic celebration, he would attain the life proposed in the Sermon on the Mount: the perfection bestowed by Baptism and reconfirmed in the Eucharist. During the last part of his life he understood that what he had concluded at the beginning about the Sermon on the Mount – that is, now that we are Christians, we live this ideal permanently – was mistaken. Only Christ himself truly and completely accomplishes the Sermon on the Mount. We always need to be washed by Christ, who washes our feet, and be renewed by him. We need permanent conversion. Until the end we need this humility that recognizes that we are sinners journeying along, until the Lord gives us his hand definitively and introduces us into eternal life. It was in this final attitude of humility, lived day after day, that Augustine died.