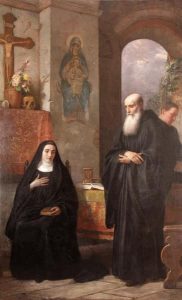 Blessed feast of our Mother among the saints, Scholastica Scholastica, the sister of Saint Benedict, had been consecrated to God from her earliest years. She was accustomed to visiting her brother once a year. He would come down to meet her at a place on the monastery property, not far outside the gate. One day […]

In one week we have two diamonds in the crown of Benedictine (Cistercian) sanctity: St Gertrude and today, St Mechtild of Magdeburg (c.1210 – 1280). The witness of St Mechtild is striking because it conveys a personal experience with the Lord. Far being abstract and vague, Mechtild relates her experience of the love she and […]

Today is the summer feast of the Holy Patriarch Benedict. It is a day to heed the advice of Benedict: seek the Lord and listen to him. It is also a day to celebrate the feast with beer made by monks. Benedict’s vision for monastic life is that the monk/nun live in community. One’s life […]

Today is the liturgical commemoration of Saint Frances of Rome, patron saint of the Oblates who live the Rule of Saint Benedict and who strive to serve. She died in 1440. Along with Frances, we have King Saint Henry, as co-patron saints of the Benedictine oblates. Frances is also revered as the patron saint of […]

Our venerable mother, Scholastica, the twin sister of the holy Benedict. Scholastica guided a community of nuns near Monte Cassino, where her brother, Benedict, organized his community of monks. When she died, sometime around the year 543, the nuns and monks carried her body to Monte Cassino, and Benedict laid her in the tomb which […]

The Church invites us today, through the figure of St. Benedict, to choose the path of an uncompromising holiness: to forsake our own treasures, so as to receive in  return the hundredfold promised by Jesus, and as our inheritance, eternal life. If the Church applies to St. Benedict the reading from the Book of Ecclesiasticus […]

Today is the feast day of St Gertrude of Nivelles, a 7th century Benedictine Abbess who lived in present day Belgium; she is not to be confused with another Gertrude who has the title of “the Great.” St Gertrude is the patron saint of cats. Given that in the USA the Irish celebrate St Patrick with […]

The famous Benedictine ascetic monk, bishop, cardinal, reformer and Doctor of the Church, St. Peter Damian (1007-1072), is honored today in the sacred Liturgy. He was noble-born in Ravenna, Italy, the youngest of a large family. His family was a bit dysfunctional and cruel to Peter; it is recorded that his mother refused to nurse […]

Today, we recall at the Divine Office and Holy Mass the venerable monastic mother, St. Hilda (AD 614-680), abbess of the double monastery at Whitby. The Church historian Venerable Bede writes, “All who knew her, called her mother, because of her outstanding devotion and grace.” Hilda is former princess of Northumbria received her monastic training in France […]