Paul A. Zalonski is from New Haven, CT, follows the Fraternity of Communion and Liberation, and is an Oblate of Saint Benedict, works as a monastery farmer and a keeper of honey bees. Contact: paulzalonski[at]yahoo.com. 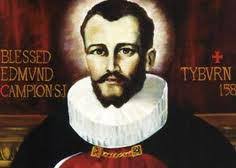 The Church liturgically recalls the memory of the great and holy English martyrs of the Venerable English College in Rome. The Jesuit Saint Edmund and 43 others is rather striking because of the intimate connection to the Roman seminary situated to form English Catholic priests. This was the time of Queen Elizabeth I’s reign and the height of Catholic persecution. Today is known by many as Martyrs’ Day.

That forty-four men who were executed, tortured, or incarcerated for giving good witness, that is, ministering the Catholic faith to their own people in England. One of Campion is remembered for what is called “Campion’s Brag,” his clear and undisputed defense of the Catholic faith. He noted that his mission was to “justify the said faith by the common wisdom of the laws standing yet in force and practice” concluding that “The expense is reckoned, the enterprise is begun; it is of God; it cannot be withstood. So the faith was planted: So it must be restored.”

The “Second Apostle of Rome,” St. Philip Neri, living opposite the English College used to greet the students with the words Salvete Flores Martyrum (Hail! flowers of the Martyrs).

The grace we ask St. Edmund Campion and his companions to secure for us is to abide in, to be attuned to, the truth of the Catholic Faith.