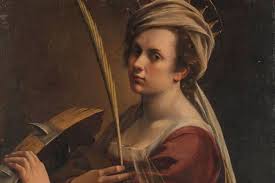 Today’s patron saint of students, philosophers, lawyers, librarians, and unmarried women is liturgically venerated by the Latin Catholic Church. St Catherine of Alexandria has a remarkable following even with a sparse historical of her life. One will recall that she was banished from the Roman liturgical calendar at the reform of the calendar in the 1960s. As a well formed Benedictine monk said, “God measures our prayer by its sincerity, not by the historical accuracy of our knowledge!” Though banished now re-instituted by John Paul II in 2004 as an optional memorial. Catherine is included in the group called the Fourteen Holy Helpers.

St Catherine had reputation of learning. Tradition says that she defeated in debate fifty pagan philosophers assigned to her by the Roman emperor. The philosophers then embraced Christian faith and preceded Catherine in martyrdom. Iconography of Catherine included a spiked wheel on which she would have suffered death for Jesus Christ –except that it broke apart upon touching the saint. She was then beheaded.

An alive and thriving monastery today named in Catherine’s honor, the sixth century monastery was built on the site said to be where Mount Sinai was located. There rest her relics and an extraordinary collection of manuscripts and incredible icons. And by the way, those manuscripts are being preserved with the help of the Benedictines at St John’s Abbey in Minn.

My friend the Benedictine monk referenced above says, “She also played an indirect role in the Hundred Years War, by being one of the three saints (the others were St. Margaret and the Archangel Michael) to appear to the peasant girl who became France’s St. Joan of Arc. The trio of saints allegedly inspired Joan to the mission that played so large a role in the survival of a France independent of the English crown.”

While it may be true that Catherine’s historical path is a bit scant, historical biography is not the key we have in the saints. As John Paul realized the mistake of the liturgical reformers was to concentrate on an overly intellectualized approach to the spiritual life. Generations of Christians –nearly 1500 years worth– have a strong devotion to Catherine. Saints show us a path to Christ that is certain; saints like Catherine show us the face of Christ crucified and risen. Hers is a discipleship I am interested in imitating.

St Catherine, pray for us.