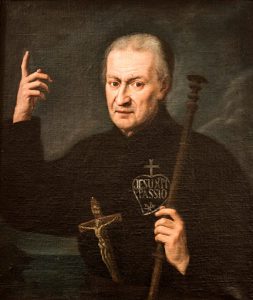 St. Paul of the Cross is likely one of those saints who gets overlooked a bit while his spiritual children are more recognizable. St. Paul of the Cross, in my opinion, needs our closer attention. We know that he had devoted his life to the service of the poor and the sick; we know his apostolic zeal in Italy, and his great penances. We know his charism overflowed to the point of founding the congregation of the Passionists: the nuns, sisters, brothers and priests dedicated to the preaching the Lord’s passion. As the Mass Collect (see below) says keenly, Paul, whose only love was the Cross, did so with courage. May we beg the Spirit for the same grace.

Next time you are in Rome, be sure to visit St. Paul at the Church of Sts. John and Paul in Rome.

The indefatigable missionary of Italy it is said that God lavished upon Paul many graces of the supernatural order. One of the stimulating pieces of Paul’s life, however, was the rigor with which he lived a life: of penance –understanding himself to be a useless servant, a great sinner. Sound familiar? The self-perception was the same as that of the Apostle Paul; this viewpoint is also similar to other saints and blesseds who lived in the 16th, 17th and 18th centuries (and before and after). Today, we give ourselves a pass on this matter. Not that we ought to beat ourselves up but we could use a good dose of humility and that’s probably one of the things we can take away from Paul: how do we understand ourselves before the Lord and do we bear our cross with simple joy and honesty. In 1867, Pius IX canonized Paul of the Cross.

The Mass Collect reads:
May the Priest Saint Paul, whose only love was the Cross, obtain for us your grace, O Lord, so that, urged on more strongly by his example, we may each embrace our own cross with courage.