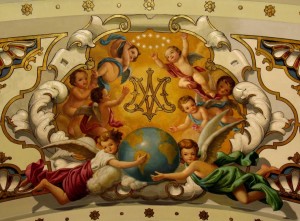 “In dangers, in doubts, in difficulties, think of Mary, call upon Mary. Let not her name depart from your lips, never suffer it to leave your heart. And that you may obtain the assistance of her prayer, neglect not to walk in her footsteps. With her for guide, you shall never go astray; invoking her, you shall never lose heart.”

This  feast was established by Pope Innocent XI in 1683, that the faithful may in a particular manner recommend to God on this day, through the intercession of the Blessed Virgin, the necessities of His Church, and return Him thanks for His gracious protection and numberless mercies.

What gave occasion to the institution of this feast was the desire of all Christendom for a solemn thanksgiving which would commemorate the deliverance of Vienna, obtained through the intercession of Our Lady, when the city was besieged by the Turks in 1683. An army of 550,000 invaders had reached the city walls and was threatening all of Europe. John Sobieski, King of Poland, came with a much smaller army to assist the besieged city during the octave of the Nativity of the Blessed Virgin, and made ready for a great battle. This religious prince began by having a Mass celebrated, which he himself desired to serve, his arms in a cross. After receiving Communion with fervor, he rose at the close of the sacrifice and cried out: Let us march with confidence under the protection of Heaven and with the aid of the Most Holy Virgin! His hope was not disappointed; the Turks were struck with a sudden panic and fled in disorder. From that time the feast day has been celebrated during the octave of the Nativity of Our Lady.

Reflection: If we, like the Christians of Europe in the 17th century, desire to appease by our prayers the divine anger which our sins have justly provoked, we must join the tears of sincere compunction to a perfect conversion of our habits. The first grace we should beg of God is that He will dispose us to maintain at all times a spirit of worthy penance. And to the invocation of Jesus it is a pious and wholesome practice to join our recourse to the Blessed Virgin, that, through Her intercession, we may more readily obtain the effects of our petitions. For this reason devout souls, with great affection and confidence, honor the Holy Hearts and invoke the Holy Names of Jesus and Mary.