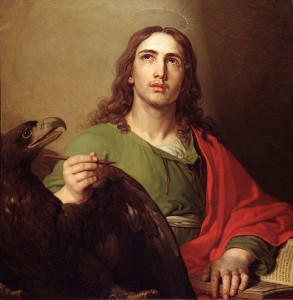 The Beloved Disciple and Evangelist, Saint John, is honored by the Church in her Liturgy today. He’s known as “the Divine” and historically known as one of the sons of Zebedee, and his mother’s name was Salome [Matthew 4:21, 27:56; Mark 15:40, 16:1]. John’s date of death cannot be fixed with any precision, but we know he lived to an advanced age and he’s known not to have been martyred as the other Apostles were. Some have claimed he made his residence in Ephesus in 97.

Saint John is represented holding a chalice from which a dragon comes out,  as he is supposed to have been given poison, which was, however, neutralized. Today is a day on which we typically bless wine. The eagle also represents John and his gospel (look closely to the image here).

Who is the Beloved Disciple, John the Divine?

From biblical study we know that John and family lived on the shores of Galilee. The brother of Saint John, considerably older, was Saint James. The mention of the “hired men” [Mark 1:20], and of Saint John’s “home” [John 19:27], implies that Salome and her children were not impoverished

Saints John and James followed the Baptist when he preached repentance in the wilderness of Jordan. There can be little doubt that the two disciples, whom Gospel does not name (John 1:35), who followed when the Baptist exclaimed with prophetic utterance, “Behold the Lamb of God!” were Andrew and John. They followed and asked the Lord where he abided. “Come and see” is the famous line. From here they entered into a profound friendship with the Eternal Word of God.

When Jesus appeared on the shore early in the morning, John was the first to recognize him. The last words of the Gospel reveal the attachment which existed between the two apostles. Peter came to know his destiny and that of his friend –the Acts of the Apostles gives evidence that they are still connected as entered together as worshippers into the Temple [Acts 3:1], and later protesting the threats of the Sanhedrin [Acts 4:13].

It’s very likely that Saint John remained at Jerusalem until the death of Mary, though tradition of no great antiquity or weight asserts that he took her to Ephesus. The exact date when he went to Ephesus is uncertain; we know that he was at Jerusalem fifteen years after Saint Paul’s first visit there [Acts 15:6]. There is no trace of his presence there when Saint Paul was at Jerusalem for the last time.

Early Christian writers such as Saint Irenaeus write that Saint John did not settle at Ephesus until after the death the Apostles Peter and Paul. He certainly was not there when Timothy was appointed bishop of that place. Moreover, Jerome thinks he governed all the Churches of Asia.. During the persecution of Domitian John was taken to Rome, and was placed in a cauldron of boiling oil, outside the Latin gate, without the boiling fluid doing him any injury. [Eusebius makes no mention of this. The legend of the boiling oil occurs in Tertullian and in Jerome]. There are some biblical experts who say that John was sent to labor at the mines in Patmos. When Nerva became the political leader John  was set free, returned to Ephesus, and there it is thought that he wrote his gospel and had a hand in the composition of other letters. Of his zeal and love combined we have examples in Eusebius, based on the authority of Irenaeus, that  John once fled out of a bath on hearing that Cerinthus was in it, lest, as he asserted, the roof should fall in, ending his reign.