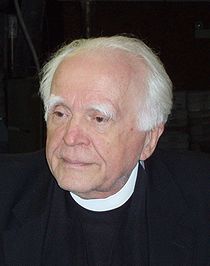 The Reverend Dom Stanley L. Jaki, O.S.B., died April 7th, in Spain after suffering a heart attack in Rome without knowing it. After arriving in Madrid to visit friends he was taken to the hospital for treatment but died days later. He was a monk and priest of the Archabbey of Saint Martin, Pannonhalma, Hungary. He entered the archabbey in 1941, professing solemn vows in 1944 and was ordained a priest in 1948. Like many other Hungarian priests, Jaki immigrated to the USA during Soviet persecution.

Father Jaki trained as a physicist and devoted his life to the history and philosophy of science and theology rather than scientific research. His intellectual work was ground breaking in connecting Catholic theology and science, and the only one to do so for many years. Jaki earned a doctorate in theology from Sant’Anselmo (Rome) in 1950 and another doctorate in (astro)physics from Fordham University in 1957. Since 1965 he has taught at Seton Hall University and honored as Distinguished Professor of Physics in 1975. After retiring he kept active by holding court, giving lectures and writing, often cantankerously.

Father Jaki was well-known for his writings on science and religion. He delievered the prestigious Gifford Lectures from 1974-1976, later published under the title of The Road of Science and the Ways to God. In 1987 Dom Stanley was award the Templeton Prize. He is considered one of the best scholars on the thought of Cardinal John Henry Newman in the U.S. His publishing record show he published 7 books and numerous articles on Newman.

“Although the world was God’s creation and, as such, to be profoundly respected, the world itself possessed no intrinsic divinity,” Father Thomas G. Guarino, professor of theology at Seton Hall, stated. “Father Jaki’s work elucidated the notion that in understanding the very laws of the physical universe, science naturally opened out toward the affirmation of faith.”